Outgoing Camden mayor, Cllr Lazzaro Pietragnoli, is inviting people to join him on two guided walks that take in several places of worship across the borough as he prepares to see out his term of office.

The two free walks will see participants being led by a Camden tour guide and stopping off at various places of worship, such as St Etheldreda’s in Ely Place, to learn more about the history of the buildings as well as the social and cultural projects held there.

The two, which are on 10 and 17 May, are among events to promote Camden’s 50th year and also mark the end of Cllr Pietragnoli’s mayoral year, during which he raised more than £10,000 for his chosen charity the Three Faiths Forum (3FF).

This will go towards promoting the role of faith groups and religious institutions in preventing extremism and in promoting social cohesion.It was raised during events that included faith meals with parts of the Muslim community, the Jewish community and the Christian community and quizzes. 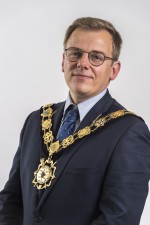 “This has been an enjoyable and satisfying year for me personally and I look forward to continuing to work with 3FF now my term is nearly over.

“I chose to work with 3FF because I was concerned at the rise of intolerance among faith groups and different communities across the UK and wanted to promote the positive role of faith groups in preventing exclusion and in promoting social cohesion.

“Camden is rightly famed for the variety of cultures that have settled in the borough, bringing with them their own traditions, music and food. We want this tradition to continue and I hope my work with 3FF has gone some way towards this.”

The walks are free but people are asked to reserve a place on http://camden50.co.uk/events/three-faiths-forum-walk/