Councillor Jenny Headlam-Wells has been officially appointed as the new Mayor of Camden in a ceremony at Camden Town Hall.

Councillor Headlam-Wells grew up in Cornwall, moving to study English at London University. A teacher, she first taught in London before moving north and becoming a lecturer at further education colleges followed by working as a university academic for over 30 years, in Hull, Lincoln, and Leeds. She returned to London 12 years ago and lives in Kentish Town

She was elected as a councillor for Kentish Town in 2010 and has chaired the Children Schools and Families Scrutiny Committee for six years, having previously served on the Planning and Licensing Committees. 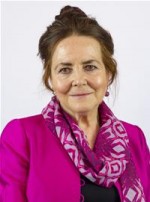 “I am striving to increase the access to arts and culture for all children and young people in the borough through the wonderful medium of music.

“Almost 32% of children in Camden live below the poverty line. I am determined that culture is accessible to all our children - every child deserves the chance to shine. My chosen charity is therefore the Camden Music Trust.

“Music-making should not be an elitist pursuit, but accessible to all. Learning a musical instrument and performing are beneficial in so many ways - it builds confidence and self-esteem, supports academic achievement, improves sociability, fosters discipline and patience, promotes creativity and can improve mental health. It can open up life chances. As the charity’s strapline says, ‘it’s more than music’.”

“We are absolutely delighted to be chosen as the Mayor’s charity. Councillor Headlam-Wells’ support will help raise awareness of the essential role of the arts in education.

“Children learning today are Camden's future citizens – it is vitally important that children can access a broad, rich and wide curriculum, so they develop into well-rounded, confident and creative young adults.”

For more information about the Mayor of Camden visit www.camden.gov.uk/mayor

Camden Music Trust is a charity that funds a broad range of music education programmes and scholarships delivered through the Camden Music Service.

Councillor Gould was confirmed as the Leader of Camden Council. The Cabinet remains the same. You can view the updated membership of Council bodies online.