Awards were presented by Mitch Winehouse to five homeless hostel residents in Camden who have taken big strides in recovering from drug or alcohol addictions or other serious issues.

Among these was Arlene de Silva who won Best Achievement Overall in the women’s category after overcoming drug and health issues and is almost ready to move out of a hostel into independent, permanent accommodation. 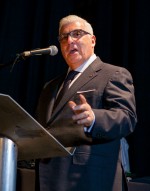 “These award winners have all managed to turn their lives around and everyone can be rightly proud of their efforts.

“They are an inspiration to others who are just starting out on their recovery journey.”

“The Adult Pathway is a true success story and one we are enormously proud of.

“By working with voluntary groups, such as St Mungo’s, we have been able to support many single homeless people to re-engage, to sort out problems in their lives and to move on to independent living .”

“I had a breakdown and was taking drugs just to escape all the bad things going on. Then a year ago someone close to me died from illness caused by substance misuse and I realised I didn’t want that to happen to me. I stopped misusing substances. Now I feel like a person again.

“I’ve signed up to a course in working with people who are substance misusers. I’m planning to get back into work and I’m looking to move into a flat of my own soon. I want to be able to show my family what I’ve achieved. I’m keen that people know how I’ve turned my life around and I would say to anyone in the situation I was in ‘Don’t give up. Don’t be afraid to accept help.”