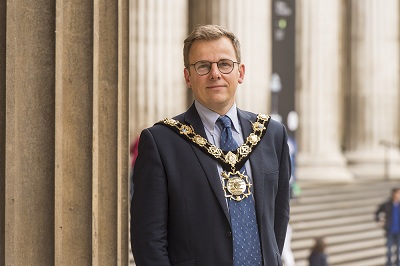 The new Mayor of Camden is Councillor Lazzaro Pietragnoli, taking over from the previous Mayor Councillor Jonathan Simpson.  His Mayoress will be Daniela Pears.

The Mayor was born in Venice but has lived in Camden for 12 years, representing Camden Town with Primrose Hill ward since May 2012.  Before becoming Mayor, Councillor Pietragnoli served on the Development and Control Committee and the Resources and Corporate Performances Committee.

The Mayor was inaugurated at a ceremony at Camden Town Hall on Wednesday 11 June.

The Mayor’s chosen charity for his year in office is 3FF, the Three Faiths Forum, an organisation which works to break down the barriers that divide people from different backgrounds and help them learn from each other in meaningful ways.  Their programmes in schools and universities and their arts events challenge negative attitudes and help to create positive relations between people of different backgrounds and beliefs, both religious and non-religious.

“I’m proud and excited to be elected as Camden’s Mayor for 2014/15. I’m looking forward to meeting many people who live work or visit Camden through my programme of official engagements. Camden is a place of great cultural diversity so I’m delighted to be working with 3FF to help fundraise for their Urban Dialogues programme which brings people from all cultures and walks of life together through the arts”

“As a Camden-based charity we know how rewarding it can be to live among people of different cultures and beliefs. But we also know we have to work to make sure we create positive connections between people. Selecting 3FF as the charity of the year shows the high importance the Mayor places on good intercultural relations in Camden, and we’re very excited to work with him.”